This is an Open Access article distributed under the terms of the Creative Commons Attribution Non-Commercial License (http://creativecommons.org/licenses/by-nc/4.0) which permits unrestricted non-commercial use, distribution, and reproduction in any medium, provided the original work is properly cited.

Hurusawa, endemic species to South Korea, belongs to the genus L., within the Scrophulariaceae family. Approximately 600 species of are distributed in the polar regions of the northern hemisphere and alpine regions of the temperate zone (Yang et al. 1998). Eleven species of this semi-parasitic plant have been identified on the Korean peninsula, with five species, , , , and , found in South Korea (Cho 2010).

was first discovered by Ichikawa in 1905 on Mt. Halla, Jeju Island, be called the two common names of the species, Halla-songipul and Seom-songipul in South Korea. Since 2012, the annual or perennial has been designated as a Grade II Endangered Species for protection by the Ministry of Environment. The plants grow in full-sun locations on the rocky ridges of high-altitude mountains. The flowering period is from July to September and the distribution is considerably rare across the geographical regions of Mt. Halla, Mt. Seorak, Mt. Bangtae, and Mt. Gaya (National Institute of Biological Resources [NIBR] 2018).

Research on the genus in South Korea began with the first report on by Palibin (1900), followed by taxonomic studies by Nakai (1911), Jung (1956), Lee (1996a, b), as well as Cho and Choi (2011). Although has been categorized as identical to (Cho and Choi 2011), in our study, and are viewed as two distinct species owing to the lack of a comprehensive review with standardized collection sites, representability as an endemic species, and comparisons with other East-Asian species.

If species appearance data are abundant, statistical-based models can be used to measure species distribution. A variety of species distribution models can be used to define relationships between empirical distribution data and environmental data (Elith and Leathwick 2009). However, it is difficult to predict this distribution in the case of species whose ecological characteristics have not been properly studied or in the case of small populations. This requires a process-based approach. The habitat suitability index (HSI) is a case in point, which can leverage less data to provide efficient decision support tools for ecosystem conservation.

A HSI allows for the quantification of environmental factors that affect habitats and represent the quality of those habitats. An HSI is based on habitat variables that identify the habitat requirements of a specific biological species (Shim 2004).

Up to date, only four studies have used HSI models for the investigation of plants indigenous to South Korea, including and (Lee et al. 2017), (Shim et al. 2020), and (Yoon et al. 2020). Also, no study, has developed an HSI model for the habitat restoration and conservation of in South Korea.

Thus, the purpose of this study was to develop an HSI model for based on a review of the current habitat status and ecology of , a Grade II Endangered Species. Especially, our results provide fundamental data for the identification and conservation of potential, alternative, and core habitats of and the evaluation of possible restoration projects.

This study was conducted in two steps. First, we development a HSI model for and, second, we applied the developed model using a field study for the identification of core habitats (Fig. 1).

Table 1 . Literature review on with a specific focus on the associated spatial factors.

The specific variables were defined based on the collected data and consultations with experts in the field, with the validity of each variable tested through field studies.

The data were analyzed regarding the historical distributions, ecological characteristics, topography, threats, and soil factors related to populations. Based on the findings of our literature review, we selected environmental factors and primary habitat variables for .

From the primary data set and through consultations with experts in the field, we derived the following five most influential habitat variables for : vegetation zone, annual average temperature, precipitation of driest month, gravel content, and crown density.

Based on our findings, referring to Lee et al (2017), we determined a suitability index (SI) and, consequently, developed a HSI model. We used ArcMap 10.7 to construct the data required in the spatial analysis for each SI model (Table 2). All raster layers were aligned with 30 m cell size, and SI layers were produced by the Reclassify tool. After that, the HSI value was obtained by the SI layers using the raster calculator. This allowed us to analyze the core habitats of on Mt. Halla, Mt. Gaya, Mt. Bangtae, and Mt. Seorak (Fig. 2). 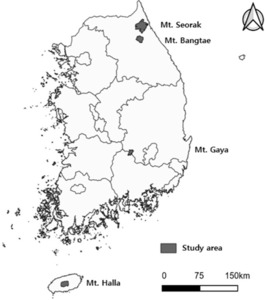 Figure 2. Study area of populations in South Korea, including Mt. Seorak and Mt. Bangtae in Gangwon-do, Mt. Gaya in Gyeongsangnam-do, and Mt. Halla on Jeju Island.

Selection of environmental factors and habitat variables for

Based on the findings of our literature review, we selected environmental factors and primary habitat variables for . From the primary data set and through consultations with experts in the field, we derived the following five most influential habitat variables for : vegetation zone, annual average temperature, precipitation of driest month, gravel content, and crown density.

The field study of the natural habitats of on Mt. Seorak, Mt. Bangtae, Mt. Gaya, and Mt. Halla showed an annual average temperature 3.71 ± 1.49°C, an annual average rainfall of 1,690.93 ± 366.97 mm, altitude of 1,454.71 ± 182.4 m, and a slope of 20–30°. For soil conditions, the highest distribution of was found in areas with a 20–50 cm effective soil depth and primarily in subalpine vegetation zones. The average distance between habitats and the nearest hiking trail was 0.38 ± 0.27 km, and the average air humidity during the flowering period (June–August) was approximately 92% or higher across all habitats. In addition, as only grows to a small height, competitive exclusion and disturbance from trampling exert pressure on existing populations, and the majority of recorded plants were located in unstable habitats that seemed to be highly vulnerable to soil loss.

Development of the SI and HSI models for P. hallaisanensis

Results from our literature review and consultations with experts in the field indicated that habitats are primarily distributed in subalpine zones at high altitudes (Kim et al. 2018; Korea National Park Research Institute 2016; You et al. 2013). Thus, we used a warmth index to distinguish between different vegetation zones (Table S1). With the exception of one site (located within a cool temperate broad-leaved deciduous forest near a subalpine zone), all populations were located in subalpine zones equal to or below a warmth index of 45. Hence, taking the potential presence of in areas near subalpine zones, an index of 0.2 was given to the cool temperate broad-leaved deciduous forest (Figs. 3 and 4). 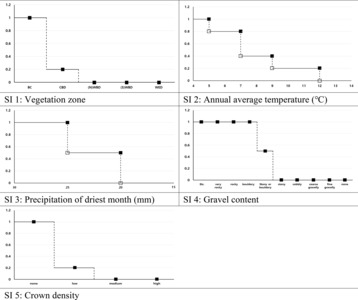 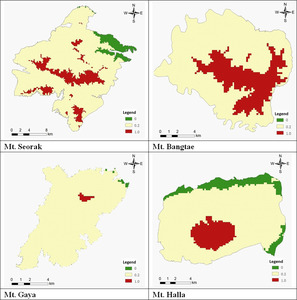 Considering the characteristic distribution of in subalpine zones, where climate change has a relatively strong impact (Kim et al. 2018), we identified temperature as having a significant influence on the distribution of We used the average annual temperature to include annual variation and abnormal temperatures, such as heat waves and cold spells. The suitability of the variable was reviewed through expert consultation (Figs. 3 and 5). 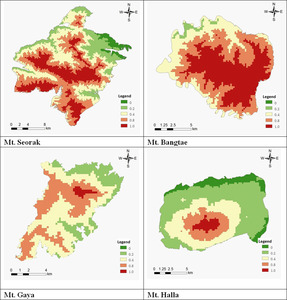 Results from our review of relevant literature together with environmental monitoring data showed to be located in regions with high air humidity. Specifically, Mt. Halla provides suitable growth conditions as the air humidity remains high through the presence of subalpine cloud cover and mist (Korea National Park Service 2013). Regarding fog (cloud and mist), however, the lack of data from a national database on spatial information prevented us from using fog as a variable. As a certain amount of moisture is a prerequisite for plant growth, we selected the precipitation of the driest month as a habitat variable. Within this context, we analyzed the habitat characteristics of 14 locations in South Korea with the precipitation of the driest month above or equal to 25 mm as the most suitable habitats (Figs. 3 and 6). 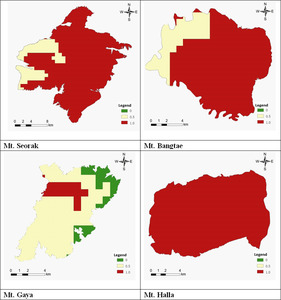 Results from our literature review and field study indicated that are distributed in rocky areas containing a thin layer of soil and in areas with a certain proportion of exposed rocks (NIBR 2018). In addition, the areas marked as “Other” in the spatial analysis (satellite image analysis and field study) consisted of bedrock and watersheds. Thus, to consider the habitat substrate, we selected “gravel content” as a further habitat variable. The gravel content of 14 habitats of (Table S2) and related habitat characteristics were analyzed to investigate the respective index (Figs. 3 and 7). 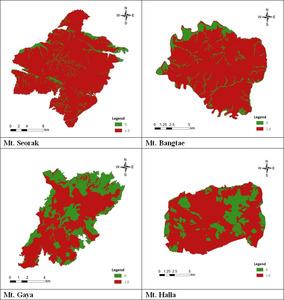 growing in full-sun grassland without forest trees or shrub layers require a high light intensity during the growing season (Korea National Park Service 2013; NIBR 2018). In addition, field observations highlighted the presence of on mountain peaks and unforested areas, such as on bedrock or cliffs. Taking these conditions into consideration, the unforested areas marked as “Other” were selected as the most suitable habitats, with the respective index (Figs. 3 and 8) based on the potential suitability of certain areas with a high level of rock exposure and a canopy cover of 50% or less (Table S3). 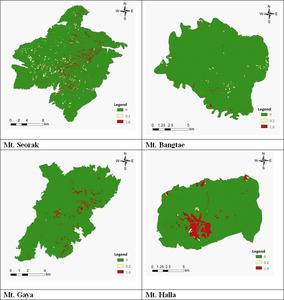 Development of the HSI model

The importance of each SI variable was estimated through expert consultation (Table 3), with the weighted value set to define the relationship with the HSI model (Equation 1).

Field study for the HSI model 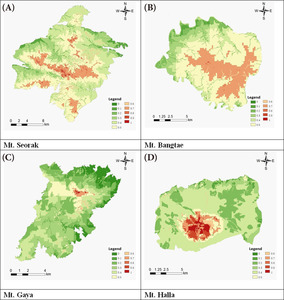 To verify our findings, we compared the results from the HSI model with field data from 14 , and HSI score of 1 was obtained for all sites, with the exception of four sites. In addition, results of the spatial data analysis indicated that the site with a score of 0.7 located on Mt. Gaya had a lower score as the grid of the respective coordinates was converted to zero (score of 0) during the GIS conversion in the SI 5 score map. Furthermore, results from the field study showed that two sites on Mt. Halla deemed unsuitable for habitation had related scores of 0.7 and 0.5, while the rocky cliff where was found had a related score of 0.9 (Table S3). In addition, the area of the sites with an HSI score of 1 (9.85 km2) accounted for only 1.38% of the total area (768 km2) of the four study sites (Mt. Seorak, Mt. Bangtae, Mt. Gaya, and Mt. Halla) (Table 4).

This study was conducted to suggest the HSI and the core habitats of Hurusawa through the investigation of the current status of ecology and habitat as well as expert consultation.

As a result, the following five habitat variables were selected for : vegetation zone, annual average temperature, precipitation of driest month, gravel content, and crown density. These habitat variables were used to develop the SI and HSI models. The resulting HSI was used to analyze the core habitats of on Mt. Seorak, Mt. Bangtae, Mt. Gaya, and Mt. Halla.

Mt. Halla accounts for 73.1% of the total core habitat area. Considering the climatic, soil, and forest conditions together with standardized collection sites, our results indicate that Mt. Halla should be viewed as a core habitat of .

The findings in this study provide useful data for the identification of core habitat areas and potential alternative habitats to prevent the extinction of the endangered species, .

Furthermore, the developed HSI model allows for the prediction of suitable habitats based on the ecological niche of a given species to identify its unique distribution and causal factors. Notably, as the effect of microhabitats, threats, and environmental change fell beyond the scope of our study, If the spatial data on the micro-climate and the long-term monitoring of the habitat are constructed through follow-up studies, detailed alternative habitats and core habitats can be suggested by the more precise spatial analysis.

This work was supported by a grant from the National Institute of Ecology (NIE), funded by the Ministry of Environment (MOE) of the Republic of Korea (NIE-B-2022-34).

The author declares that they have no competing interests.