#These authors equally contributed to this work.

This is an Open Access article distributed under the terms of the Creative Commons Attribution Non-Commercial License (http://creativecommons.org/licenses/by-nc/4.0) which permits unrestricted non-commercial use, distribution, and reproduction in any medium, provided the original work is properly cited.

Besser, distributed among Northeast Asia including Korea, is often seen in mountainous area. Among the 52 known species in Korea, is known to have an earlier flowering timing of March to April (Lee 2003). Not only has the early and short blooming period, but also has the limited habitat under closed canopy of deciduous forests. is a mixed breeding herb and produces both chasmogamous and cleistogamous flowers. Chasmogamous flowers are big, showy, open and out-crossing which are usually visited by insect pollinators. Cleistogamous flowers start to be produced in later part of the flowering season, resemble small buds, closed and self-pollinate (Culley and Klooster 2007). This unique reproductive system could be beneficial compared to other reproductive strategies, and could be the key to its survival as habitat change occurs (Yang and Kim 2016). Several studies have shown modified production of chasmogamous and cleistogamous flowers under various environmental conditions, such as light intensity and soil moisture content (Bell and Quinn 1987; Sternberger et al. 2020; Waller 1980), and nutrient availability (Corff 1993).

Climate change, especially global warming, makes trees to sprout early and forest canopy to close earlier (Nam and Kim 2020). These environmental changes could impact more significantly to due to its early and short blooming period added to their limited habitat. Mt. Odae, known habitat of , has been evaluated to be high on current and future climate change vulnerability (Kim and Kim, 2016). This vulnerability was estimated using temperature and precipitation factors, which indicate that habitat of would face temperature rise and relatively dry condition. As climate change is known to threaten one in six species (16%) to extinct (Urban 2015), could be more vulnerable. Along the other species in genus , is capable of producing both chasmogamous and cleistogamous flowers.

Although there are several previous studies about , most of them have focused on its taxonomic characters (Hodálová et al. 2008), seed dispersal (Beattie and Lyons 1975), and seed germination (Lee and Hwang 2006). In spite of the importance of this particular species, little is known about the growth of . However, it is important to understand the effect of shade and nutrient on the growth and reproduction for sustainable restoration or conservation of .

In this study, we focused on independent and potentially interacting effects of two principal environmental factors for the growth of mountainous herbaceous plants, shade and soil fertility, to understand the ecological characteristics of growth. Therefore, we conducted a mesocosm experiment to determine 1) the effects of shade and nutrient on reproduction, especially the production of chasmogamous flowers and cleistogamous flowers, and 2) the effects of shade and nutrient on the vegetative growth of .

Origin of plants used in the experiments

Design of the mesocosm experiments

The effects of shade and fertilizer on the growth of were assessed with a 2 × 2 factorial experiment (i.e., two levels each of light and nutrient). Collected samples were situated in experimental sets with two light conditions of 100% natural light (light, group L) and 80% natural light using black polyester net (shade, group S) and two soil fertility conditions of fertilizer treated (fertilized, group F) and fertilizer not-treated (not fertilized, group N). For group F, 0.24 g of fertilizers (Won Ye Bak Sa; Dong-Bu High-Tech®, Bucheon, Korea) of a granule type, which gradually release N-P-K (11-10-8) and Mg-B-Ca-Si-S (2-0.2-11-5-4), was applied five times since 30th June 2016 for fifty-one weeks, which is a recommended dose by manufacturers in agronomical usage. Each group has 17 replications.

We counted the numbers of leaves (2017), chasmogamous (2017) and cleistogamous (2016–2017) flowers, and fruits (2016–2017) of each plant in the interval of 1 or 2 weeks. The chlorophyll content of the leaves was measured as a Soil Plant Analysis Development (SPAD) value using a portable chlorophyll meter (SPAD-502; Konica Minolta, Inc., Osaka, Japan) at 3th August and 5th November 2016 and 28th August 2017. Three leaves were randomly selected per pot and SPAD values were measured and averaged for each measurement. The SPAD sensor was placed on leaf mesophyll tissue only with the main vein avoided. In addition, leaf area and weight of three randomly chosen leaves were measured to estimate the reproductive strategy and leaf functioning under varying light and fertilizer conditions. We measured coverage of each pot in order to estimate the growth rate of the plant, as the coverage is related to not only the size and density of the plant but also the amount of light that can be intercepted by plants. In the case of coverage, images of each plant were captured and analyzed using ImageJ (National Institutes of Health, Bethesda, MD, USA). At the end of the experiment (31 August, 2017), the aboveground materials were cut off at ground level, and the soil was carefully removed from the belowground materials. After each of these above-ground (AG) and below-ground (BG) components were harvested and oven-dried at 70˚C for at least 48 hours, dry weights of AG and BG biomass of each plant were measured. AG/BG ratio was calculated by dividing the dry weights of AG into the dry weights of BG. 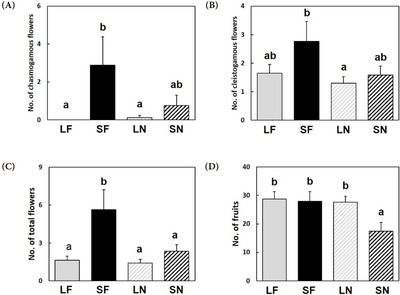 Effects of shade and fertilizer

Table 1 . values from two-way ANOVA results on the effects of light and fertilizer on growth traits.

Furthermore, production of flowers including both chasmogamous flowers and cleistogamous flowers was not affected by soil fertility under light conditions, whereas fertilizer facilitated production of flowers under shade conditions. It is likely that plasticity to shade was enhanced by the simultaneous application of soil fertilizer. This is consistent with previous studies that expression of light-dependent plasticity is modified by soil nutrient conditions (Choi et al. 2021; Latham 1992).

On the contrary, vegetative growth, especially morphological traits of leaves, significantly responded to different light and soil fertility conditions (Kim and Kim 2022). The number of leaves were affected by both light and fertilizer, whereas coverage and weight of leaves showed significant difference only under different light and soil fertility conditions, respectively. The number of leaves and coverage increased under shade condition. This can be understood as the result of shade tolerance as the maximization of light capture and photosynthesis in low light intensity conditions (Cooper and Qualls 1967). Leaf chlorophyll content was higher under shade conditions than light conditions. Higher leaf chlorophyll contents under low light intensity condition were widely accepted in previous studies (Cooper and Qualls 1967; Guenni et al. 2018). Higher leaf chlorophyll contents enhance the light use efficiency and thus improve carbon gain leading to the increase in shade tolerance (Givnish 1988; Valladares and Niinemets 2008).

In the case of AG and BG dry weights, the belowground dry weight decreased under shade conditions, and the ratio of AG and BG dry weight under shade conditions was comparatively greater than under light conditions (Fig. 4). This may be attributed to that more biomass was allocated to aboveground for higher carbon assimilation through photosynthesis under low light intensity conditions (Selzer et al. 2013), which has also been observed in other herbaceous species (Martina and von Ende 2012; Park et al. 2019). Although biomass allocation was shifted under different light treatments, it was not statistically significant difference. This is consistent with previous studies that a significantly lower biomass was attained only when light availability was reduced to 10% of full-sunlight intensity (Ryser and Eek 2000; Semchenko et al. 2012).

In the case of AG and BG dry weights, fertilizer treatment has resulted in non-significant change in their biomass (Fig. 4). This may be the result of retainment in phosphorus nutrients to support future growth (Fitter and Setters 1988). Fertilizer experiment in three species showed no significant alternation in allocation except in clearly nutrient-deficient condition, and vegetative allocation being less variable (Fitter and Setters 1988). This suggests that fertilizer treatment has increased the reproductive organs’ biomass via allocation and for not-fertilized group nutrient wasn’t deficient enough to result in growth restriction or reduce in biomass reduction. Furthermore, this is consistent with previous study in Viola blanda where only reproductive biomass was greater in fertilized condition (Griffith 1998).

On the other hand, there was no significant interaction between light and soil fertility conditions in their effects on reproductive and vegetative growth of (Table 1). Studies have shown that higher light intensity bolsters the effect of fertilizer application (Corre et al. 1983). However, shade treatment did not act as a limiting factor of this species, and this could indicate that V. collina is a shade tolerant species. Thus, no apparent interaction was shown and light and fertilizer showed independent effects on the reproductive and vegetative growth.

The datasets used and analyzed during the current study are available from the corresponding author on reasonable request.