In South Korea, the first case of ASF was reported in a domestic pig farm in Paju-si which belongs to Gyeonggi-do on September 16, 2019, and then in wild boars, the disease spread through Gangwon-do to Dangyang-gun, Chungcheongbuk-do, on the southern border of Gangwon-do. Gangwon-do covers the largest part of the Baekdudaegan Mountains and the forest area of Gangwon-do occupies 80.5% of the province (Korea Forest Service 2021). The mountains in Gangwon-do are connected to those in Chungcheongbuk-do through the Baekdudaegan Mountains (Korea Forest Service 2021). In order to prevent the spread of African swine fever virus (ASFV) to ASF-free areas, it is necessary to identify areas with a high probability of finding ASFV-infected carcasses and reduce the density of wild boars in those areas. The habitat suitability map (HSM), which is derived using the GPS coordinates of the sites where ASFV-infected carcasses were found, provides information on the area to be surveyed for searching the ASFV-infected carcasses in ASF-free areas. It can provide important information in selecting the areas which should be managed in order to prevent the spread of ASFV to ASF-free areas. If ASFV spreads to the ASF-free areas, it is more likely that ASFV-infected carcasses will be found first in the areas with more suitable habitats in the HSM. Thus, HSM can help significantly in selecting hunting target areas, ASFV-infected carcass search areas and fencing installation areas.

Gangwon-do is located in the northeastern South Korea and consists of 7 cities and 11 counties. The province borders Gyeonggi-do to the west and Chungcheongbuk-do to the south. To analyze the trend of ASF spread in wild boars, 1710 GPS coordinates of ASFV-infected wild boar carcasses (Fig. 1A), which were detected during the period of October 2, 2019 to November 20, 2021, and the report dates were provided from Ministry of Agriculture, Food and Rural Affairs, Republic of Korea. 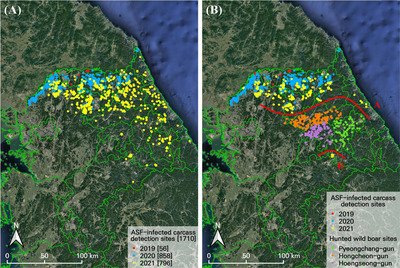 The HSMs were constructed through Maxent using occurrence records and environmental variables. The GPS coordinates of the sites where ASFV-infected carcasses were found and the sites where hunted wild boars were found were recorded in the CSV file format. The CSV file was used as the input file for Maxent. In addition to the species occurrence data, 11 variables in total were also used as model inputs, referring to the previous studies (Lim et al. 2015; Seo et al. 2008; Song and Kim 2012). The variables were categorized into terrain-, forest- and human-disturbed variables. The three terrain variables (elevation, aspect, and slope) were obtained from the Digital Elevation Model (DEM) database in the National Geographic Information Institute website (http://map.ngii.go.kr/) and one terrain variable (distance from water system) was obtained from the stream order map of the Water Resources Management Information System (WRMIS). The four forest variables (forest type, crown density, age-classes of trees, and diameter at breast height of trees) were taken from the 1:5,000 Forest Type Map by the Korea Forest Service. The two human-disturbed variables (distance from residences and distance from farmlands) were from the 2020 Subdivision Land Cover Map from Ministry of Environment and one human-disturbed variable (distance from roads) was from the Road Map of Korea from Ministry of Land.

To understand the spatial distribution throughout Gangwon-do, the ESRI shape-file of the administrative boundary map along the province was overlaid onto the grid file containing bioclimatic variables in ArcGIS 10.2 (Esri, Redlands, CA, USA). This grid file was then overlaid on DEM data to generate information on the altitudinal range of wild boars in the area.

After the first outbreak in a domestic pig farm in Paju-si, Gyeonggi-do on September 16, 2019, an ASFV-infected wild boar carcass was first discovered in Sinseo-myeon (GPS coordinate; 38.264194, 127.077194), Yeoncheon-gun, Gyeonggi-do on October 2, 2019. In Gangwon-do, an ASFV-infected wild boar carcass was first discovered in Wonnam-myeon (38.309722, 127.603056), Cheorwon-gun, which borders Gyeonggi-do, on October 11, 2019, and then found across wide regions of the northern Gangwon-do from the western (Cheolwon-gun) to eastern (Goseong-gun) regions. In 2020, ASFV-infected carcasses were found only in the northern Gangwon-do, and not in the middle regions of the province. Unexpectedly, however, on December 28, 2020, an ASFV-infected carcass was found in Jucheon-myeon, Yeongwol-gun in the southernmost part of Gangwon-do, far away from previously known outbreak areas.

In Yeongwol-gun (Satgat-myeon), which is located in the southernmost part of Gangwon-do, adjacent to Chungcheongbuk-do, an ASFV-infected carcass was discovered again on October 31, 2021, almost 10 months after the first incidence in Yeongwol-gun (Jucheon-myeon) on December 28, 2020. Since then, 8 more cases were found in Yeongwol-gun in less than a month until November 20, 2021.

In Chungcheongbuk-do, the first case of ASFV-infected carcasses was reported in Danyang-gun, which is adjacent to Yeongwol-gun, Gangwon-do, on November 14, 2021; later they were also found in Jecheon-si on November 19, 2021, showing a trend of spreading in Chungcheongbuk- do.

Despite the active quarantine policies in Korea to block the spread of ASFV through wild boars, such as fencing and pre-emptive hunting, and detection and removal of ASFV-infected carcasses, ASF is currently spreading at a relatively rapid pace among wild boars. The maximum propagation linear distance of ASF in wild boars was 222.7 km (from Paju-si; 37.912916, 126.711692 to Samcheok-si; 37.427001, 129.160967) for about 26 months up to November 20, 2021 since the first ASF outbreak in wild boars on October 2, 2019. Since ASF spread by wild boar movement was estimated to be < 25 km in a year (Taylor et al. 2021), the spread of ASF tends to spread at a faster rate in South Korea.

The monthly average number of the ASFV-infected carcasses was 71.5 ± 52.1 cases (n = 12, range = 24–185) in 2020 (January 1 to December 31), which was a little lower than 75.9 ± 42.2 cases (n = 10, range = 19–168) in 2021 (January 1 to October 31), but there was no statistically significant difference between the two years ( > 0.05) (Fig. 2). The ASFV-infected carcasses tend to be found more in winter and spring (January to April) (Fig. 2). They appeared at the highest frequency in March (185 cases) in 2020 and February (168 cases) in 2021. In summer (August), they appeared at a rather high frequency. In EU, the proportions of ASFV-infected cases in hunted wild boars remained low throughout the year without visible seasonal patterns, but there was a clear seasonality in the proportion of ASFV-infected cases, from wild boars found dead, showing a declining trend in summer and increasing trend in winter (EFSA et al. 2021). Although there may be potential biases because the effort to search cannot be quantified only due to the quarantine policy of the country, the results show a general trend of seasonal occurrence of ASFV-infected carcasses. 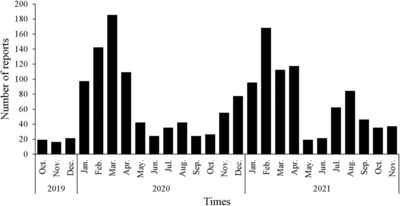 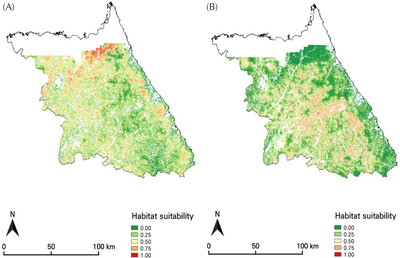 Figure 3. Habitat suitability maps derived using the GPS coordinates of the sites where ASFV-infected wild boar carcasses (A) and the hunted wild boars (B) were found in Gangwon-do. On the map, the empty space under the northern boundary of Gangwon-do is at the places where the four forest variables of environmental variables were not provided by Korea Forest Service. GPS: global positioning system; ASFV: African swine fever virus.

The HSMs using raster cells with more than 5.0 HSI, based on the GPS coordinates of ASFV-infected carcasses, provides information on areas where there is a high probability of finding ASFV-infected carcasses. The suitable habitats with more than 0.5 HSI was much larger in Yanggu-gun (60.2%) than in other cities or counties in Gangwon-do and accounted for more than 20% in10 cities or counties (Fig. 4, Table S1). 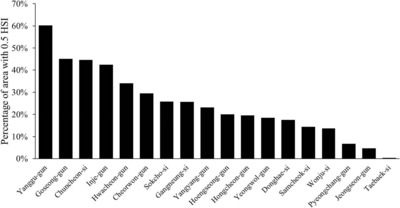 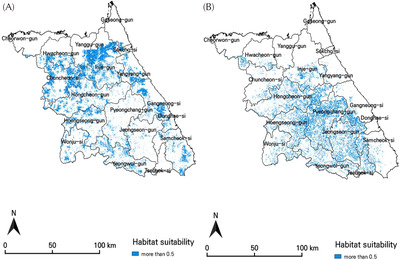 According to the HSM derived using the GPS coordinates of the hunted wild boars (Fig. 5B), more moderate suitable habitats (≥ 0.5) are distributed widely in the middle part of the province, revealing high suitability in most of Pyeongchang, eastern part of Hongcheong, eastern part of Heongseong, and southwestern of Gangneung. The suitable hunting sites in the HSM did not correspond to the areas where the high spread of the ASFV-infected wild boars was expected (Fig. 5).

This work was supported by Korea Institute of Planning and Evaluation for Technology in Food, Agriculture and Forestry (IPET) through Animal Disease Management Technology Development Program, funded by Ministry of Agriculture, Food and Rural Affairs (MAFRA) (320067-02-1-CG000) and Kangwon National University 2019.

The datasets generated during and/or analyzed during the current study are available from the corresponding author on reasonable request.