In this study, we simulated the annual dynamics of non- native red-eared slider populations in relation to the habitat expansion and survivorship in new habitats. The spread of the species can be divided into anthropogenic and natural spread. Anthropogenic spread defines the introduction and settlement of the species into new habitats through release by humans. This type of spread is closely related to urbanization (Koo et al. 2017). In Korea, urbanization has progressed rapidly since the 1970s. Therefore, we assume that the spread of red-eared sliders has continued with the ongoing urbanization. If the species adapts to a new environment and reproduces, natural spread to new areas will occur due to migration (Koo et al. 2017), which has been confirmed for the eared slider in Korea (Koo et al. 2019). If the available habitat increases due to the combination of both anthropogenic and natural factors, the red-eared slider population will also increase.

We developed a logistic model and simulated several spread scenarios for the red-eared slider to identify the factors affecting its population dynamics. Our study provides important information for appropriate population control and removal through the predictions of future proliferation.

Population dynamics of the red-eared slider

We used a logistic equation with time-dependent habitat carrying capacity, expressed as:

The carrying capacity is a function of the population at the time of – τ, such that:

With normalizing () by unit, which is the counting unit used for the red-eared slider (i.e., hundreds or thousands), the relative and dimensionless red-eared slider population size () was defined as


Substituting and converts the logistic equation (1) to


The variable α represents the dimensionless habitat size, whereas (·) represents the scaled red-eared slider survivorship, which can be affected by environmental factors such as predation, dissolved oxygen levels, temperature distribution, food availability. A summary of these key parameters is presented in Table 1.

To simulate annual population dynamics, we set the delay time τ as one year. Then the population between the year of [, + 1] can be expressed as


where represents the initial population of red-eared slider at the beginning of the nth year. The effective habitat carrying capacity between the year of [n, n + 1] is

As more than one million red-eared sliders were imported and sold in Korea from the late 1970s to 2001 (MOE 2009), we simulated the species’ population dynamics for twenty years. The distribution of the red-eared slider is associated with urbanized areas (Koo et al. 2017) and was assumed to increase by approximately 3% per year, comparable to the rate of urbanization of 3% in Korea from 1980 to 2000 (Fig. 1) (Macrotrends 2021). Thereafter, population changes in habitats were estimated over twenty years, assuming that anthropogenic habitats would no longer spread. In 2001–2020, the red-eared sliders had been released, possibly increasing their habitat. However, a distinction was made between before and after the law bans the import of red-eared sliders. Moreover, urbanization after 2001 has been very slow. Since 2001, the urbanization growth rate has been less than 1% and has recently been stagnant, so the period from 2001 to 2020 was simulated as the settlement period. 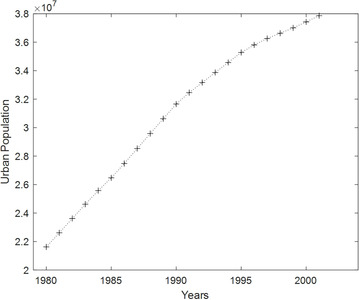 Figure 1. Urban population in South Korea from 1980 to 2000. The population increased on average by 2.79%, which can be referred to as the anthropogenic habitat expanding rate. The habitat increase rate of red-eared sliders was set to 3% in the simulations.

Red-eared sliders have a general survivorship of 1% in their native range (Feldman 2007), but may have much higher survivorship in invaded areas. Thus, population dynamics were estimated under different survivorship scenarios. The survivorship in the new habitats was set to 1%, 50%, or 99%, depending on the ecosystem conditions.

The following algorithms were applied to calculate the annual population size as the habitat increases.

1) Initial red-eared slider population size was set to one unit, which could be a thousand or a million.

2) The initial habitat carrying capacity α was set to two units (Initial habitat size, defined as the area available for habitat in units of population, was set as approximately twice the initial settlement population).

3) New habitat was produced every year, at a rate of a 3% increase in .

2) No further habitat increase was assumed. 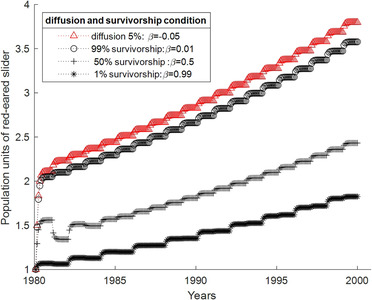 The results for the red-eared slider population x() under the assumptions of the increasing habitat model are summarized in Table 2.

After the first twenty years with increasing habitat availability, no further increase of anthropogenic habitat was assumed for the next twenty years. The red-eared slider populations for the three levels of survivorships under these assumptions are compared in Table 3. The population size for 2000 was set at 3.577 units. Under poor survivorship (i.e., = 0.99), the population sizes converged to 1.826 units and exhibited large-amplitude fluctuations over alternating years (“+” line in Fig. 3). The size of the population increases and decreases rapidly every other year according to the new effective capacity. These oscillations show a biennial pattern of population changes, despite only 1% of survivors. This means you can find a lot of red-eared sliders in one year and hard to find sliders in the following years. For the intermediate case ( = 0.5), population sizes showed medium amplitude fluctuations (“o” line in Fig. 3). Under favorable conditions ( = 0.01), populations exhibited minimal variation and maintained high population size of 3.576 units (“*” line in Fig. 3). Changes in carrying capacity showed that the red-eared slider population fluctuated every other year. However, after several years, it converged to a certain value depending on the survivorship. 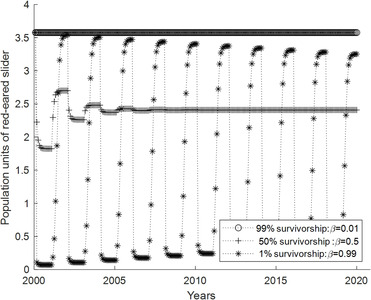 According to simulation results, it is necessary to reduce the amount of habitat available to the red-eared slider to reduce its non-native population. However, because it is difficult to artificially remove the habitat, preventing the species’ further spread should be the top priority. To prevent further anthropogenic spread of red-eared sliders, local governments should issue legislations which prohibit the species’ release and movement after capture. In addition, appropriate management and control approaches need to be developed for the habitats invaded by red-eared sliders (i.e., artificial wetlands and ecological parks). Further, early detection of the invasive species is another factor that should be implemented in management strategies. Effective detection methods may increase the chances of finding the species at a smaller population size, lessening the extent of damages to the ecosystem (Huxel 1999; Lowe et al. 2000; Mehta et al. 2007). Moreover, to manage an invasive species efficiently, it is necessary to understand the ecological requirements of the species (Gibbons 1986; Jung and Lee 2019). Since species’ characteristics in the new habitats may differ between regions (Taniguchi et al. 2017), information obtained from studies on physiological characteristics, such as diet and growth rate, can help to prepare efficient management plans (Donlan and Martin 2004). Finally, ecological characteristics should be considered to lower the survivorship of red-eared sliders. For this, natural removal of spawning grounds i.e., by maintaining populations of turtle egg predators like ants, raccoons, moles, and ground mice (Perez-Santigosa et al. 2008) and artificial removal of spawning grounds (Cadi et al. 2004) may be possible strategies. It is also important to reduce the survivorship of red-eared sliders by restoring or maintaining a healthy condition of the ecosystem.

If field data by year are available, even spatial changes in the population can be included. The basic equation can be extended by modifying the carrying capacity to add spatial parameters such as latitude and longitude. In this case, various ecological information related to red eared sliders, such as habitat conditions, food, predators, and competitors, is required

Based on high discovery frequencies and reports of natural reproduction (MOE 2006), it can be assumed that red-eared sliders adapted to their new environment and that there is ample potential for further spread of the species. An increased population density caused by introduction decreases the individual food intake rate (Alonso et al. 1994). Furthermore, it results in the natural spread of the species.

Long-distance movement of turtles is caused by factors such as nest site selection, seasonal migration, departure from unfavorable habitat conditions, and movement by males in search of females (Gibbons 1986). Generally, they do not travel long distances unless forced due to natural disasters (e.g., floods). It is estimated that red-eared sliders move approximately 600 m to 800 m away from the water system (Koo et al. 2019). The average moving distances of two red-eared sliders, confirmed through radio tracking in a river environment, was 425.00 m ± 94.84 m and 543.00 m ± 11.27 m, respectively (Koo et al. 2012). The distance confirmed through the capture-recapture method was as far as 5 km for males and up to 3 km for females (Morreale et al. 1984). In addition, compared to females, males are more active in early spring and late autumn. It is assumed that during this time the females are nesting.

Natural spread of red-eared sliders has been reported in Korea (Koo et al. 2019). Therefore, we included the natural spread in our simulations to estimate the red-eared slider population. Taking natural migration into account, the simulations showed that even if 1% of the population migrates, habitat growth is much greater than the number estimated based on the maximum survivorship.

To control the invasion of red-eared sliders in Korea, the anthropogenic spread of the species needs to be restricted and natural ecosystems have to be recovered. The recovery of natural ecosystems would also contribute to lowering the convergence point of the red-eared slider population. More importantly, to curb population growth, the habitat carrying capacity needs to be decreased by reducing further spread. For this, regulations to prohibit the release the species into the wild, and appropriate management plans for the wetlands or artificial ponds must be implemented. This requires the continuous ecological monitoring of the habitat status as well as risk assessments. To restore or maintain the ecosystem balance, anthropogenic spread must be strictly controlled by law and by volunteers.

We would like to thank the reviewers for their thoughtful comments and efforts towards improving our manuscript.

This study was supported by the Korea Environment Industry & Technology Institute (KEITI) through the Project for the Development of Biological Diversity Threats Outbreak Management Technology (2018002270004), funded by Korean Ministry of Environment (MOE). Additional funding was provided by the National Research Foundation of Korea (NRF), which is funded by the Ministry of Education, Republic of Korea (NRF-2020R1I1A3071769).

The datasets generated and/or analyzed during this study are available from the corresponding author upon reasonable request.